. Wow, I don’t even know where to begin. I absolutely loved this country and its culture, more than words could ever describe. The people are what made so special; I felt really drawn to them. The Japanese people are such genuinely kind, respectful, and appreciative people. I love how they bowed upon meeting us. I found it interesting how many Americans (especially teenage boys) raise their heads and say “hey” to someone when passing by them in the hallway, almost in an arrogant fashion. Japanese people are the opposite. They bow their heads in humility, out of respect for the person they meet. They lower themselves, rather than acting as if they are above the other person. This kind and simple act was very symbolic to me. I was also pleasantly surprised to find that every Japanese person would go out of their way to help us, no matter what it was we needed. They would drop everything to take us somewhere when all we asked for were directions. We had someone whom we had just met accompany us to the temple and then invite us for some tea and ice cream. He then welcomed us into his house so we could use the internet, and we exchanged contact information to stay in touch.

Something else I admired about the Japanese was that they led incredibly healthy, low-stress lifestyles. They are definitely doing something right. They have the highest life expectancy in the world. They also have the second highest economy in the world right after the , yet they are merely 4% of the size of the . Now when I look at Americans, myself included, I’m going to see us through a different lens. I want to acquire some of the qualities I admire in the Japanese and put them to use back home in the States. I love their sense of fashion, especially the street fashions found in the famous Harajuku District of Tokyo. Miss Gwen Stefani put Harajuku on the map for Westerners when she came out with the Harajuku Girls (her four Japanese backup dancers a.k.a. Love, Angel, Music, and Baby). Although there was some controversy surrounding her using the girls, I am still a fan of their unique style. I did some shopping in Harajuku and bought a nautical sailor outfit and some plaid Catholic schoolgirl socks. The Japanese men had such unique hairstyles with wild highlights, and all the young men I saw on the subway looked so intellectual and professional with their business suits. I found them attractive, even though I’m typically not attracted to Asian men. I guess intelligence is a very important quality to me—it’s what gets you ahead in life. Here is a picture of two girls in Osaka dressed up in funky fashions. 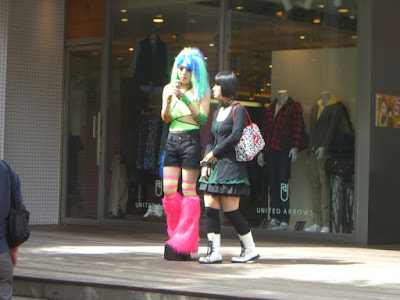 Another observation I made was that everyone had really large cell phones. I was wondering why big cell phones were popular since smaller electronic gadgets were more preferable in the . Then I realized that everyone was watching TV and movies on their cell phones, flipping the screens around. I was really impressed with the high-tech gizmos of .

Well, enough with the rattling on and on about how much I love . I will tell you about my personal experiences in the five days I was in the fabulous country. I know I said I would try to keep it short, but there is just sooo much to write about, that I will never be able capture everything! As soon as I stepped off the ship, I was in awe of everything around me. It was all so different, including the side of the road on which people drove their cars. After taking in all the new things around me and getting past the surrealism of being in my very first port country, I went with my group to exchange our rail passes. We then took the train into , which soon became my favorite international city (along with ). I can definitely see myself living there in the future. The minute I arrived in , my senses were flooded with new sights, sounds, smells, tastes, and textures. Everything was so colorful and vibrant. It reminded me a lot of , except it had quite a bit more sex shops, strip clubs, and stores that sold Japanese animé porn! Later that night we went to Shibuya, a thriving nightclub district where the locals party. Shibuya was like the Times Square of Tokyo, with bright, colorful lights and giant plasma billboards everywhere. We went to a club called Gas Panic and a karaoke bar. Karaoke originated in , so it is huge over there. 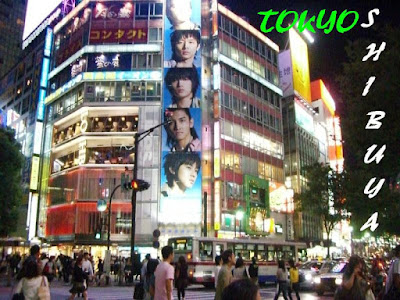 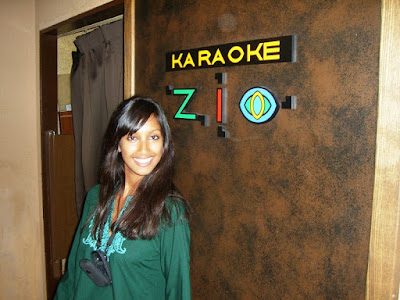 Our lodging of choice—after much dispute—was a capsule hotel. These are famous in , and often times, businessmen will stay in one of these if they miss a plane or train or for a quick nap. A couple people in our group were scared to sleep in a capsule because they were claustrophobic, but it really wasn’t as small as one would think when they hear the word capsule. It wasn’t like a coffin or tanning bed; it was actually tall enough for me to sit up, and there was a TV inside. Here is a picture of what they looked like. 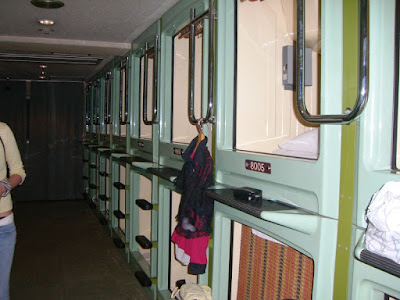 The second day we went to the , one of eastern ’s oldest temples. I got my fortune read by picking a number and then pulling a piece of paper out from under that number. The paper said that I would have high and excellent fortune, but everyone else in my group received a bad fortune! 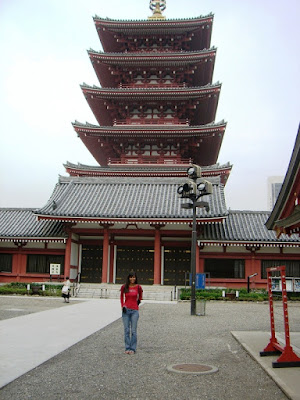 Later that day, we went to a Sumo wrestling match, which I was really pleased with. It looks just like it does on TV, if not better. We had really good floor seats, so I got a close-up view of the wrestlers' bare butts! 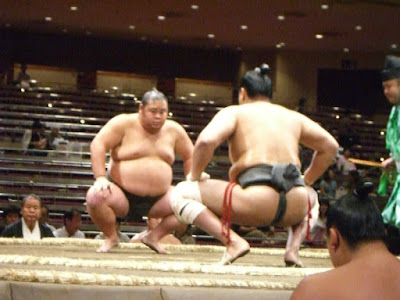 Then we went to the , the Harajuku District, and then took a bullet train (Shinkansen) to . I love the public transportation in ; it’s one of the most reliable I have ever seen. The bullet trains travel up to 160 miles an hour and come quite frequently. It took about three hours to get to , and it’s in the opposite end of the country. This is what the bullet trains looked like... pretty high-tech, huh? It looks like an airplane without wings. 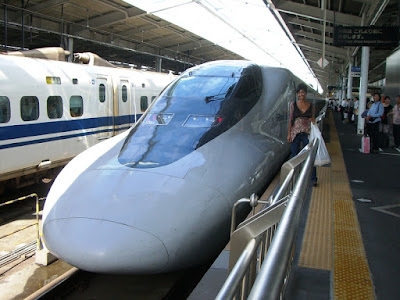 I had pizza, sea urchin sushi, and sake for dinner and then went to sleep at a Manga Café, which is basically an internet café with beds and showers. It’s a brilliant idea that the should adopt. The rooms are small cubicles that consist of a computer, TV, DVD player, and cot. Unlimited internet is included in the price.

The next morning we went to the in , where we saw the A-bomb dome. This dome is a UNESCO World Heritage site and is one of the only structures in that survived the explosion of the world’s first atomic bomb. The skeletal structure of the dome remained intact, as you can see in the picture. 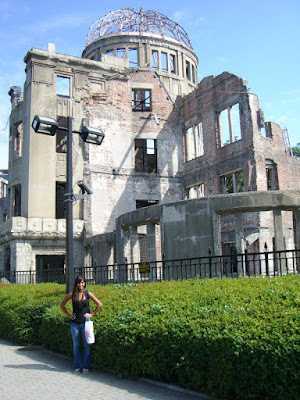 We also went to the , a very sobering experience in and of itself. The graphic pictures of civilians with their skin falling off and their faces disfigured from the detonation of the atomic bomb brought tears to my eyes. The radiation emitted from the bomb had long-lasting effects on the people, causing deformed babies and cancer for years to come. I couldn’t believe my country was cruel enough to decimate an entire city when there were alternative solutions. was a much more horrendous act than was.

After we saw the depressing, but eye-opening museum in , we took a bullet train to , where my friend Keeley and I dressed up as maikos, very similar to geishas. Here is a picture of me in the traditional attire. The whole experience took almost two and a half hours! 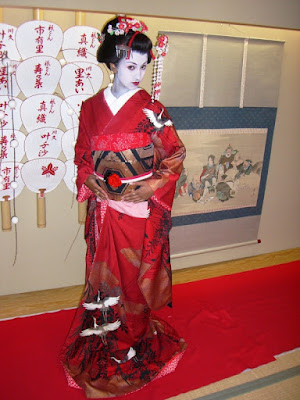 Then we went to the Gion Corner to watch some Japanese performances of Gagaku music, Bunraku puppet theatre, a tea ceremony, flower arrangement, and maiko dance performance.

The next morning I took an early bullet train to where the ship was now docked. I got some lunch on the ship and freshened up before meeting up with two of my Japanese friends Aki and Megumi at Sannomiya train station. Aki’s dad drove us to Arima . Something I found interesting was that I had to cover my tattoos with bandaids because tattoos symbolized the Japanese mafia. The whole public bathhouse experience was a very unique one in which I had to go outside my comfort zone. Everyone is completely naked in front of each other in the steaming hot water; it was a bonding experience. We had to rinse off in the shower before entering each of the baths. I found myself more comfortable being naked in front of the Japanese women than I did in front of my American friends. Two of my American friends and I decided to take a shower together in the nude the night we stayed at the capsule, and it was so embarrassing for me! I’m not sure why I get so shy when it comes to being naked in front of other women. The Japanese women aren’t very judgmental, although I did get a couple stares. They weren’t bad stares, though; they ended up complimenting me on my skin and my figure (Japanese women don’t really have curves).

After a nice long soak in the natural , we came back to the ship to get ready for a night out on the town. Aki wanted to show us her hometown of . We had dinner at a cool restaurant where they cooked Japanese omelets in front of us on our table, and then we went to a photo booth to get cute stickers made. These photo booths are really popular in and are much more high-tech than the ones in the States. We ended up staying there for a long time and got too tired to go out to a club! We decided to go back to to sleep on the ship so that we wouldn’t have to pay for a hostel.

The next morning, I went with my friends to once again (the luxury of having a rail pass!). We went to the 100 Yen store, which is basically the equivalent of our Dollar Stores, and I bought some home decorating stuff, all for less than $1 each. I bought a paper lantern, a folding fan, a wall banner, a reed window screen, etc. Then I ate some delicious takoyaki, or octopus pancake balls, for lunch, before parting with my friends to go to on my own. is the biggest castle in and is also a UNESCO World Heritage site. By mere coincidence, I ran into some people I had seen earlier at . They saw me on the street and recognized me, so I ended up hanging out with them at the castle… what a small world! 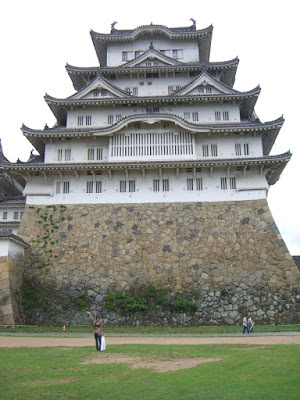 Finally, I had to go back to the ship in because it was time to say goodbye to . I was so sad to leave, but it was definitely a good first country to go to! I have to say, I started my Semester at Sea off on the right foot! 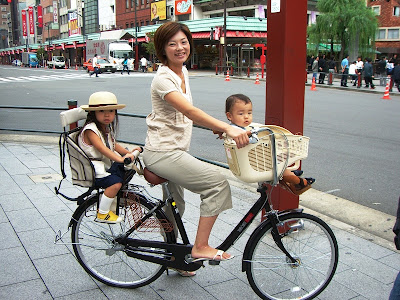 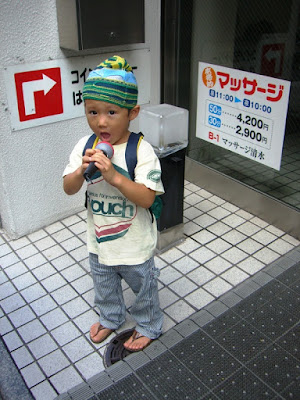 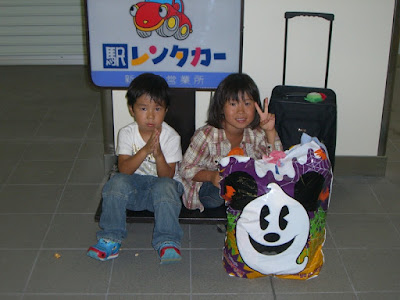 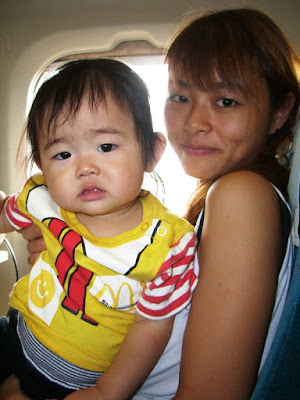 Hey - i'm going on the fall o8 voyage so i'm following some of the SAS blogs now. But Japan looks awesome! On my trip it's going to be our last foreign port, but i've heard so many fantastic things from you and the other people that I definately can't wait! That tatoo bit is crazy, too. ANY tattoo =s mafia? Bizaare.
-Ameya