Today, Sunday, September 2, 2007, we arrived at our very first port of call, . It was my first time in , and I really enjoyed myself. However, I do wish we could have spent more time there. I wanted to do so many things (visit Pearl Harbor, hike up crater and Nu’uanu Pali Lookout, go to a luau, etc.), but there just wasn’t enough time. After clearing customs and making our way off the ship, we had less than eight hours to enjoy . I hadn’t made any solid plans for the day, but I had bought a One Day Go Oahu pass from a friend on the ship, which I ended up not using.

I woke up around 6am and went to the deck to watch the sunrise. We hadn’t seen land for five days straight, so it was really cool to wake up and see that we were already docked in . I took some pictures of the harbor, had breakfast, and then went through immigration. Even though we were going to another state in the , we still had to go through immigration because we were coming from a Mexican port. You can imagine how long it takes for 700 students and faculty to go through the process. No one is allowed off the ship until everyone is cleared. We docked in around 5:30am, but we didn’t actually get off the ship until after 10am! It was very frustrating as we waited in anticipation to explore the sandy beaches of . There were people anxiously waiting to go skydiving, shark diving, waterfall diving, scuba diving, and any other kind of diving you can think of! Patience was something we all were lacking.

Once we got off the ship, I met up with a girl from the ship named Beth, and we decided to go snorkeling at . It took us a while to figure out what bus would take us there, and after asking endless amounts of people and wasting almost an hour to find the right bus stop, we finally made it there. It was kind of embarrassing since we were still in and still having a hard time getting around! Many of the locals were giving me compliments and asking where I was from. They must have assumed that I was a native Hawaiian like them! We were having so much fun striking up random conversations with anyone and everyone who crossed our paths; it helped us learn more about the Hawaiian culture. It was interesting to see a lot of Japanese tourists in ; most signs were written in both English and Japanese.

We finally arrived at our snorkeling destination, , and the view was dazzling—the turquoise water glistened in the sunlight, while the palm trees swayed in the breeze. I felt as if I came straight out of a commercial or a picturesque scene from a Jimmy Buffet song. I just wanted to lie in a hammock under the palm trees and sip Piña Coladas all day, but I had a full day ahead of me. 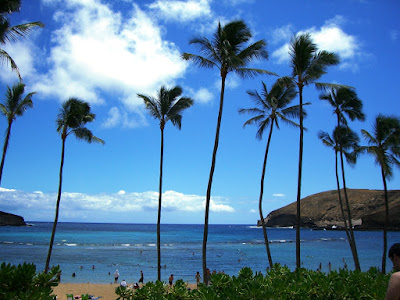 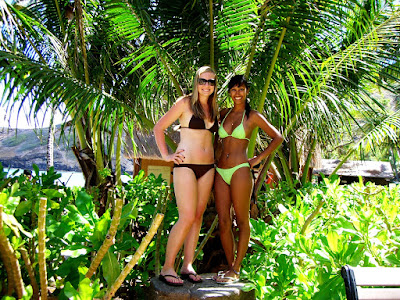 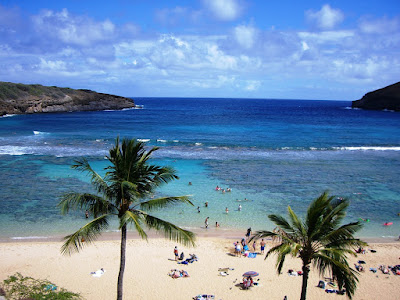 After watching a brief safety video, Beth and I got our snorkeling gear and set off for two hours of underwater exploring. I saw many different kinds of tropical fish and colorful marine life. A Hawaiian guy near me saw a sea turtle and called me over there, but it was gone by the time I got over there. This guy was really interesting, though. He picked up seashells and hermit crabs the bottom of the ocean and kept giving them to me. He let me touch a sea urchin, too. The snorkeling was really fun, except the waves kept pushing me onto the coral reef, which scratched up my ankle. It was all worth it, though, because I had a really cool lifeguard clean it up and bandage it for me! 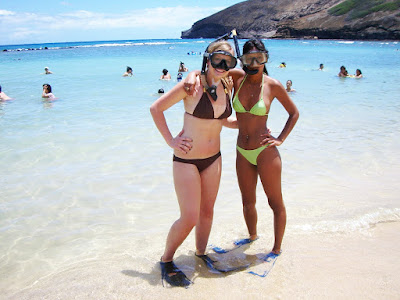 After two long hours of snorkeling, we became very hungry, so we took the public bus back towards . We met some locals who told us about Rainbow Drive-In, a local hot spot with authentic Hawaiian food, including plate lunches. One of the locals got off the bus with us and led us to the restaurant. Beth and I shared a mixed plate, which consisted of barbeque beef, boneless chicken, mahi mahi fish, macaroni salad, and rice. It was so delicious! I couldn’t tell if it was because I was really hungry or if I was getting tired of the ship food, but I completely devoured it. Something I found funny was that they charged extra money for everything. They charged for the cups of water, which I understood, but then I asked for an extra plate so we could split the food, and they said, “That would be ten cents.”

After eating our delightful Hawaiian cuisine, Beth and I parted ways. She needed to pick up some things from Wal-Mart and make some phone calls. I wanted to be in the water some more, so I walked to . On my way, I stopped at a hotel to ask the receptionist where I could get a lei, and he just gave me a live orchid one for free! Ahh, aren’t Hawaiians so sweet?!

Then I went to a place where I could ride an outrigger canoe, but was told the canoes weren’t going out anymore for the day. The guy at the shop felt bad because I told him I was in for only one day, so he took me out on a long board to catch some waves instead. We went tandem surfing, which was something I had never heard of. He was behind me on the board, and I had to wrap my legs around him while we paddled in sync. It was an awkward position at first because his face was right in my butt! Whenever a wave would come, he would push me into it and hold the board while I stood up. The first time I did this, my whole bikini top (as itty bitty as it was) moved to the side, and I flashed everyone! I was a little insecure at first because I wasn’t wearing the appropriate bathing suit for surfing, and I had to keep readjusting myself when I stood up, which would make me lose my balance and fall. After a couple waves though, I started getting the gist. This was basically my first time surfing, and I rode a wave all the way down without falling off. The only other time I tried surfing was in , but the waves were really small. It’s kind of ironic that I live in , but never went surfing there. Now I can finally say I rode the waves of !

After hitting the surf, I saw some fellow SASers on the beach. They were telling me all about their exhilarating skydiving experience and showing me the pictures. Then I decided it was time to have some drinks. I went to a place called Cabana’s Pool Bar at a hotel, and a guy from the Navy bought me a mai tai. He was telling me about his experience with submarines in the Navy, and he just so happened to go to school at in . I had to cut our conversation short so that I wouldn’t miss the sunset at . Before I left, he gave me a teddy bear that he had won a couple nights ago. He wanted me to have it to remember him and my time in .

Finally, I was on my way back to the beach to watch the sunset. As dusk approached, I got some magnificent shots of the beautiful golden sun as it disappeared into the horizon of royal blue water. 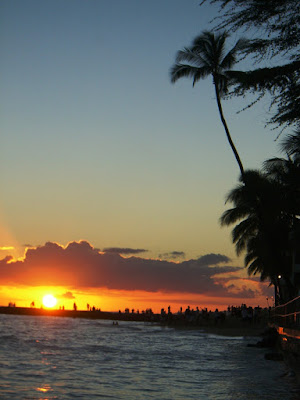 Then I made my way back to the place where I went surfing earlier because the instructor had told me to come back later that evening so we could catch some more waves. I got there too late, however, and the shop was closed. That didn’t stop me from getting in the water, though. I just loved the warm waters of ; the beaches in are definitely not as warm. I ended up surfing with another random surfer guy that was nearby in the water. He pushed me onto some waves, but they were fairly small.

I realized that it was getting late, so I headed back to the bus stop to get to the ship. One of the shop workers named led me to the bus stop, and I picked up some shell leis and a t-shirt from one of the ABC stores along the way. After waiting more than 15 minutes for the bus to come, I decided it would be better to take a cab to make it back to the ship on time. I definitely did not want to get dock time! I hailed a cab and went back to , where the ship was docked. The cab ride cost me almost $20 since I was riding it by myself. I wish I was with someone else while roaming around the streets of , but maybe next time. So I made it back to the ship without getting dock time, which was a relief. Some of the students got kicked out of the program for trying to sneak alcohol onto the ship.

Overall, my one day in was fabulous. I definitely want to go back there so I can explore more of Oahu, as well as and the big island. Well, I’m sorry for the huge novel. Next time, I will try to be more succinct, but there’s just so much to say!
Posted by Unknown at 5:31 AM