My Thoughts on War and Violence

Hello everybody! I just returned from and , and I am really behind on my blog! Don’t worry, as I will catch you up about my visits to and whenever I get a minute to breathe. Things are happening so fast. I’m really sorry that I haven’t been able to update you all as quickly as I’d like to, but please understand that I have very limited time, as well as limited internet access. I have had only two days at sea in between each of the Southeast Asian countries because of their close proximity to one another. In those two days, I have class and pre-port meetings, in addition to writing papers for school, studying for tests, and doing the assigned readings (which I usually never do!). I also have to plan what I am going to do in my next port of call, making any necessary flight reservations. Finally, when I get a chance, I go through my thousand pictures I take at each port and pick a few that I want to post on my blog. This process alone takes me forever because I am a photo junkie and like to take pictures of anything and everything, including my food that I eat at every meal in port! What can I say, I want to remember every detail of this voyage, and food is very important to me!

Anyway, I just had some things on my mind lately that I thought I’d share with you. Going on this voyage has opened up my eyes to things I never really took the time to think about. I have been growing and learning so much about myself already, and one thing that I learned is that I feel passionate about the injustices done to innocent people in this world and want to do something about it.

While I was in for three days, I learned about the horrendous massacre that recently took place by the Khmer Rouge. The more I learned about this slaughtering of an entire people, the more enraged I became. We visited the actual killing fields in , the capital city of , and I left there with a heavy, sickening feeling in the pit of my stomach, a deep sorrow in my heart. I can’t believe something to this magnitude happened in such recent history (less than 30 years ago), and I was never told about it. This genocide was just as atrocious as the Holocaust, but it is rarely talked about in US schools. The number of victims killed totaled nearly three million, and they were all killed brutally and painfully. They killed children, babies, elder people, anybody. Most of them were tortured before they were killed (e.g., had their fingernails pulled out and then had alcohol poured on their hands). Very few were killed with guns because the executioners didn’t want to waste their precious bullets on them. Instead, they were killed with very barbaric weapons such as hoes, shovels, and dull knives. Just thinking of this makes me want to cry and vomit at the same time.

Pol Pot (short for Political Potential, and not his actual name) was the sick, twisted bastard who had this genocide carried out. He had to be insane because no sane person could be that cruel. He had the idea that could become an agrarian utopia by way of Communism, so he wanted to kill off anyone and everyone who was rich or educated to create “equality” in the population. He basically wanted everyone to be farmers. Instead of helping the poor and uneducated improve, he wanted to kill the wealthy and educated to create the sense of egalitarianism. He was good at brainwashing people, just like Hitler was, convincing innocent little kids to kill their parents and turn against their friends. He would accuse people of being in the CIA and make them confess or else torture them until they did. Either way, he would end up killing them.

In the killing field we went to, more than 8,000 skulls were piled up and displayed in front of us in a tower. There were many more that were destroyed and never found. Here are some pictures of the skulls. There were shelves upon shelves of them piled from floor to ceiling in the tower. On the ground, we found some clothes scattered, surfacing from under the dirt. I really feel that it’s important for everyone, especially Americans, to be aware of and learn more about this evil act of violence. 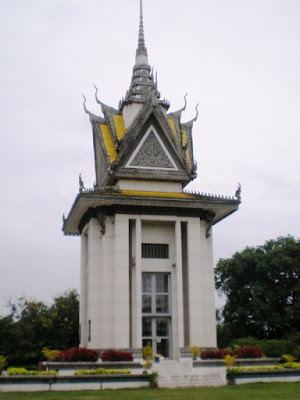 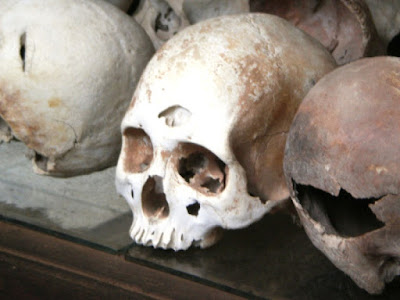 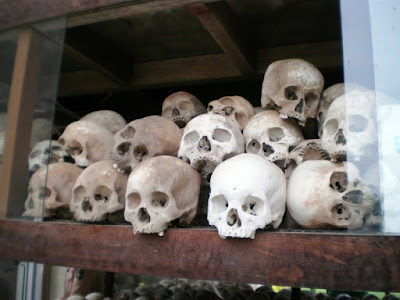 The violent acts committed by American soldiers against the Vietnamese during the Vietnam War were just as cruel. When I went to the in , I was horrified at the gruesome things we did to the poor Vietnamese. The would never reveal these things to us. I saw paintings, like the one below, created by the Vietnamese children illustrating the devastation of war and how it tore their families apart. 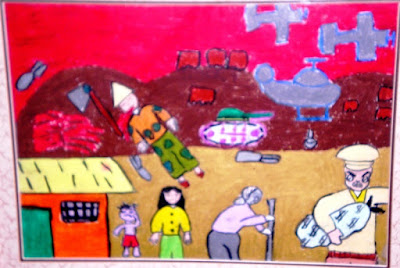 The two pictures below show American soldiers with the corpses of Vietnamese guerillas. Read the caption on the second picture. Now you can see how war warps and desensitizes one's mind. To many of the American G.I.s, the Vietnamese were a sub-human species. Killing them was like killing animals; they just didn't seem to matter. 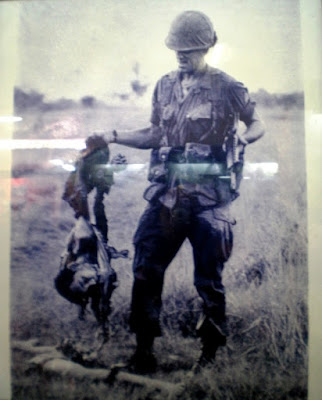 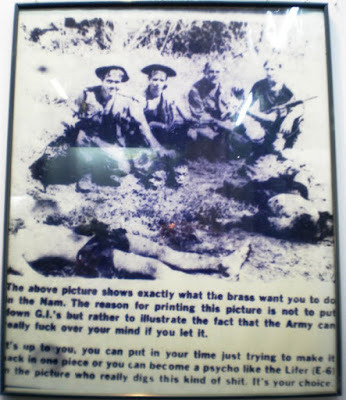 I also learned about how we poured Agent Orange everywhere, which caused disabilities and deformities for generations to come, similar to the effects of the atomic bomb on . The picture below shows a deformed stillborn baby preserved in formaldehyde. The other two show severe burns and deformity. I know the pictures are really graphic, but I'm trying to get my point across-- that war always and inevitably destroys the innocent. 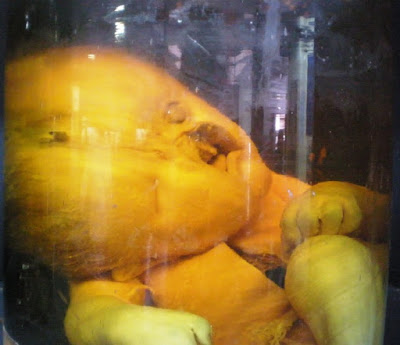 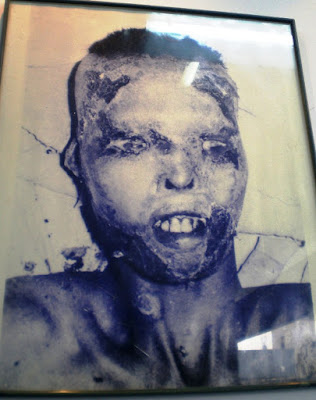 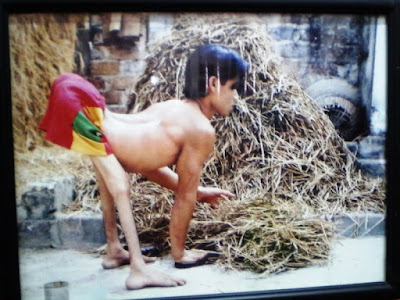 There are so many parallels between and what is going on in right now. We could easily replace the word with and the word Communist with Terrorist, and you have history repeating itself right in front of your eyes. We are destroying millions of innocent civilians in the name of who knows what. Freedom? Democracy? It’s kind of hard to be free when you have hundreds of US military forces pointing guns at you during all hours of the day. Aren’t we being a bit contradictory? Why are we as a nation and a generation allowing ourselves to be puppets of Mr. Bush and doing whatever he tells us? It’s time we stood up and put an end to this nonsensical warfare.

As far as the Holocaust and the genocides in , , , and many other places, we might not be able to change what’s already been done, but we can definitely do something about what’s happening right now. There are massive groups of people being slaughtered in , , and . History has a tendency to repeat itself, so why not educate ourselves and prevent it from occurring again?

Throughout history, it has been very difficult to take down dictatorships internally. There are usually endless acts of murder and cruelty from the abuse of power until an outside force comes in and helps take down the dictator. Dictators usually come into power when a country is weak and defenseless, on the false premises that he will revive and renew the country’s resources. Once they come into power, all hell breaks loose. I mean, just look at the parallels between Hitler and Pol Pot, between and . was weak because of World War I, and was weak because of the Vietnam War. In both countries, the killing was ceaseless until outside forces intervened.

My point in all this is that we should really think about what is going on in the world around us, instead of just focusing on the little bubble we call home. Start watching the world news, and look for ways we can be an agent of change. Because of history’s repetitive nature, we are able to foresee the future to some extent. Therefore, if we are given the opportunity to change the future because of the power of knowledge (just like in the TV show Early Edition), without even thinking twice, we should seize it. How blessed we are to have this unique opportunity to stop the heinous crimes against our fellow human beings! And just think, if we don’t step in as a generation and do something soon, what will our children think of us when they read their history books?

Reality sets in with a harsh beginning, and what is going on right now in Burma is a duplication of what you have so aptly described re Cambodia...

Reality has set in on you with the Cambodian history, Viet Nam, and the same thing is going on today in Burma...

It was tough to read this post but
I thought it was good experience for you.and for me too!
Now I thought next time I travel other Asian countries, I need to see such museums.

I wish all all people, esp americans (no offense) could get our of their little boxes and experience the world.. its refreshing to see. I hope this experience will enable you to see what i believe that the true injustices of your own country are thrice fold. From an outsider point of view I see the effects of the US on the world. Now i'm here, I see the cunning terrorism on its own people.

Hi , I'm a Sr. High school student who is thinking about joining Semester at Sea. and with doing my re-search I found you blog, So i hope you don't mind me commenting your page.
Any ways on your blog I was so shocked about that. to be honest, I try to shelter myself from all the bed in the world and that was many of the thing that brought me back to earth.

That's a seriously good article, you are very perceptive and write well. It is so hard to get a sense of scale when it comes to major wars, especially after both sides propogandize to blur your view. I am especially impressed at how you compared Cambodia to Iraq, they are indeed two sides of the same coin and it always kind of depresses me when I hear masses of unsophisticated people say that the latest war is kinder and gentler.

Hello. This post is likeable, and your blog is very interesting, congratulations :-). I will add in my blogroll =). If possible gives a last there on my blog, it is about the Wireless, I hope you enjoy. The address is http://wireless-brasil.blogspot.com. A hug.

we went to your website but it was under construction...

Hi Melissa,
we invite you to have your profile page on zonabonita.com
zona bonita is what one would call: finally an intelligent page for models and artists.
Probably later on we will also do an online interview with you
if you are interested, send us your photos (free of copyright) and some info you like to see in your profile
hope to hear from you soon
have a nice day
the zonabonita team

check our site on http://zonabonita.com

I admire the courage of your convictions and no holding back in vehenement abbhorrence to man's inhumanity to man..History repeats itself C.Blakeman